A fusor is a device that uses an electric field to heat ions to nuclear fusion conditions. The machine induces a voltage between two metal cages, inside a vacuum. Positive ions fall down this voltage drop, building up speed. If they collide in the center, they can fuse. This is one kind of an inertial electrostatic confinement device – a branch of fusion research. *

The fusor was originally conceived by Philo T. Farnsworth, better known for his pioneering work in television. In the early 1930s, he investigated a number of vacuum tube designs for use in television, and found one that led to an interesting effect. In this design, which he called the “multipactor”, electrons moving from one electrode to another were stopped in mid-flight with the proper application of a high-frequency magnetic field. The charge would then accumulate in the center of the tube, leading to high amplification. Unfortunately it also led to high erosion on the electrodes when the electrons eventually hit them, and today the multipactor effect is generally considered a problem to be avoided. *

What particularly interested Farnsworth about the device was its ability to focus electrons at a particular point. One of the biggest problems in fusion research is to keep the hot fuel from hitting the walls of the container. If this is allowed to happen, the fuel cannot be kept hot enough for the fusion reaction to occur. Farnsworth reasoned that he could build an electrostatic plasma confinement system in which the “wall” fields of the reactor were electrons or ions being held in place by the multipactor. Fuel could then be injected through the wall, and once inside it would be unable to escape. He called this concept a virtual electrode, and the system as a whole the fusor. *

A basic schematic of the fusor is shown below (credit to Richard Hull and fusor.net). As one can see, conceptually, a fusor is a relatively simple devices. However, for serious work, including applications such as a neutron source in the medical industry or space propulsion applications, the design can be very complicated with extremely tight tolerances. Additionally, there is the risk of producing dangerous radiation, and so strict safety protocols must be implemented. 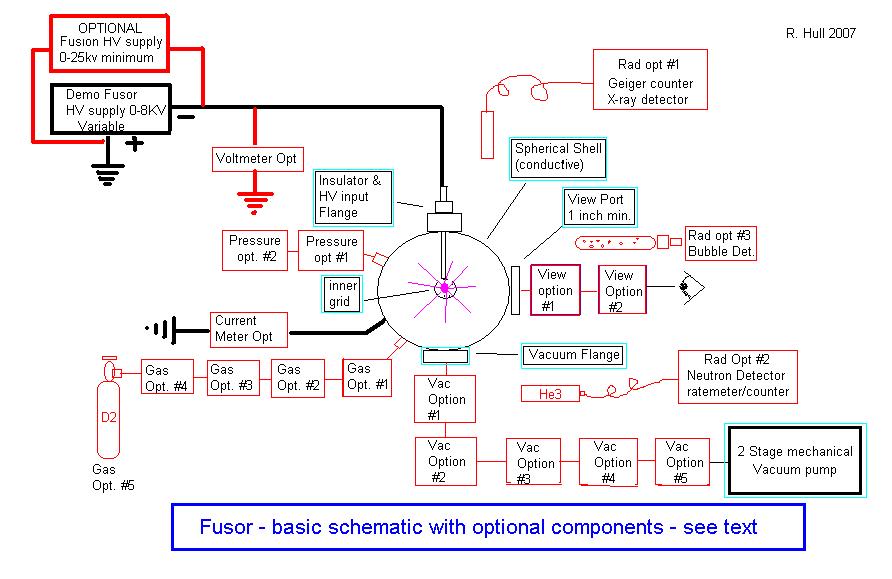 For a detailed description of the construction of fusor devices, please visit the FAQ on fusor.net:

Fusion takes place when nuclei approach to a distance where the nuclear force can pull them together into a single larger nucleus. Opposing this close approach are the positive charges in the nuclei, which force them apart due to the electrostatic force. In order to produce fusion events, the nuclei must have initial energy great enough to allow them to overcome this Coulomb barrier. As the nuclear force is increased with the number of nucleons, protons and neutrons, and the electromagnetic force is increased with the number of protons only, the easiest atoms to fuse are isotopes of hydrogen, deuterium with one neutron, and tritium with two. With hydrogen fuels, about 3 to 10 keV is needed to allow the reaction to take place. *

Traditional approaches to fusion power have generally attempted to heat the fuel to temperatures where the Maxwell-Boltzmann distribution of their resulting energies is high enough that some of the particles in the long tail have the required energy. High enough in this case is such that the rate of the fusion reactions produces enough energy to offset energy losses to the environment and thus heat the surrounding fuel to the same temperatures and produce a self-sustaining reaction known as ignition. Calculations show this takes place at about 50 million kelvin (K), although higher numbers on the order of 100 million K are desirable in practical machines. Due to the extremely high temperatures, fusion reactions are also referred to as thermonuclear. *

The fusor is part of a broader class of devices that attempts to give the fuel fusion-relevant energies by directly accelerating the ions toward each other. In the case of the fusor, this is accomplished with electrostatic forces. For every volt that an ion of ±1 charge is accelerated across it gains 1 electronvolt in energy. To reach the required ~10 keV, a voltage of 5 kV is required, applied to both particles. For comparison, the electron gun in a typical television cathode-ray tube is on the order of 3 to 6 kV, so the complexity of such a device is fairly limited. For a variety of reasons, energies on the order of 15 keV are used. This corresponds to the average kinetic energy at a temperature of approximately 174 million Kelvin, a typical magnetic confinement fusion plasma temperature. *